Apparently, we are once again deep into FOMO:

“We’ve had clients across the board call in and ask where to put their money,” said Tom Stringfellow, president and chief investment officer of San Antonio-based Frost Investment Advisors. “Investors aren’t making any mass movement trying to get out of the markets, but they’re really looking for something to buy in this environment.”

While the market was up big, Zillow cratered.

They were off about 30% in the previous 3 months & then slid an additional 26.9% yesterday to close at $29.99 a share.  Trade volume was massive at almost 10x average daily volume.

We ended the quarter with $1.6 billion in cash and investments on our balance sheet and added cash from operating activities of approximately $102.5 million on a year-to-date basis, which positions us well to fund our next stage of growth.

Here is the competitive landscape for Zillow, based on SEMrush charts for Google search results in the United States.

They literally dominate their market. Realtor.com has passed up Trulia as Zillow stopped investing as much in Trulia & is milking its brand equity. But Trulia is still #3 & Hotpads is #5.

Here is a GIF showing how the market has changed over the past half-decade, with 1 data point for each October.

For comparison sake, UK property site Zoopla was bought by Silver Lake for $3 billion.  And here is what Zoopla’s profile looks like.

Having read the transcript of the quarterly conference call, I think the market is overreacting & doesn’t understand the friction in running an auction-based marketplace & is misunderstanding what the shift from version 3 to 4 to 4.1 of Zillow’s Premier Agent product does.

Zillow went from sending agents a bunch of emails, to a fewer number of warm calls, to what will soon be a blend of both.

When they shifted their primary lead channel from email to phone calls that lowered the total number of leads sent to Realtors at the same time the back half of the year housing slowdown coupled with rising rates finally starting to impact the economy.

Anyone in sales knows that a warm lead on the phone is worth much more than an email. You can hear a buyer’s voice inflections, understand how urgent their demands are, what their big hang ups are & what their must haves are, etc.

From the conference call:

The consumer experience from all of this is very important to understand. I gave you some data about the improved response rate from about 49% to around 100% from consumers being able to get agents on the phone. I’ll give you one other data point to try to dimentionalize why this PA 4.0 and PA 4.1 changes are so important. Consumers that were contacting an agent through PA 3.0 gave us a 2.5 out of 5-star rating on their experience. Consumers that go through PA 4.0 or PA 4.1 give us a 4.1 star rating out of 5. So that’s a 60% improvement in consumer satisfaction with this new lead connection model. That’s huge. That’s why I know that the changes that we’re making with PA 4.0 and PA 4.1 are good for the business, good for the company and good for the user.

TripAdvisor suffered the same sort of cratering when they shifted from PPC to offering hotel booking services, but ultimately for the businesses to stay sustainable they need to move beyond selling clicks & have deeper integration. TripAdvisor was only generating about 30% as much from mobile visits as they were from tablet or desktop users. Ultimately to have a sustainable business model in a competitive category with high traffic acquisition costs you need to have repeat visitors.

To this day TripAdivsor is still having some bumpy quarters due to the model shift, …

Tripadvisor has struggled in recent quarters as revenue growth has slowed and profits have fallen due to weaker monetization rates on mobile ads than desktop ads, and due to the company’s launch of its Instant Booking platform hitting unexpected headwinds.

… but ultimately it is something they had to do.

Selling clicks is higher margin & faster growth in the short run, but over time it becomes a less efficient model because you don’t build the organic audience comprising of repeat visitors who actively seek out your business. 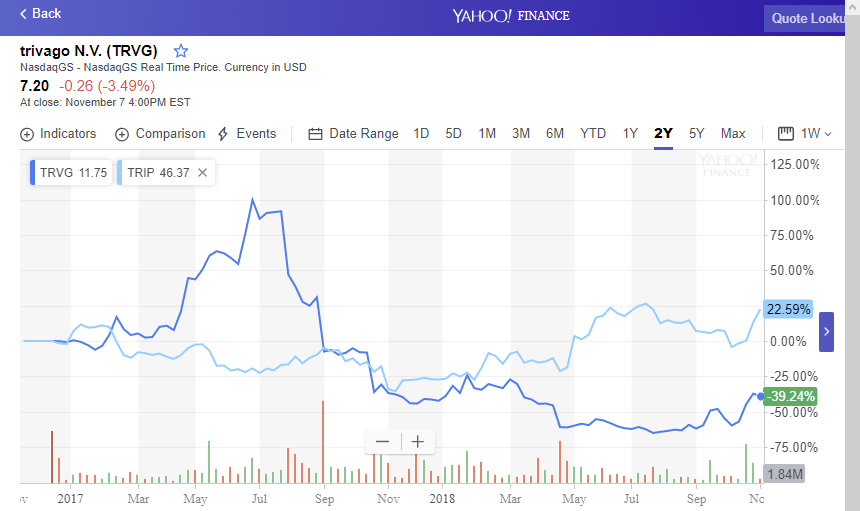 And then you eventually run out of people to advertise to & the prices you must pay for traffic increase as people become less receptive to your site and brand.

The alternative is you take the short-term hit to go deeper into the funnel & then see it through to the other side.

Fundamentally, TripAdvisor had mixed success. Average monthly unique visitors were up 8% to 490 million, although hotel shopper counts were down 5% to 160 million in the same period. Revenue per hotel shopper inched higher by 5% to $0.41, ending a long streak of zero or negative moves for the metric. TripAdvisor now offers more than 700 million reviews and opinions, with 2.1 million accommodations, 1 million travel activities, and 4.9 million restaurant listings sending total listings above the 8 million mark.

The cost of doing so is frequently about a 50% haircut in the stock price at the nadir, but then the business has greater longterm stability.

Unless you are Google it is quite hard to become a habit by sending people elsewhere for the transaction. And even Google is bundling hotel booking features in their search results.

If you don’t own the operating system it is hard to build a habit out of a site that sends users elsewhere. There’s a reason the EU fined Google €4.34 billion for Android bundling & there is a reason Google is expected to pay Apple an estimated $9 billion this year & $12 billion next year for default search placement n Safari.

Amazon.com did away with much of their ad options that sent users offsite for conversions & instead is primarily selling ads which lead to on-site conversions. That allowed them to get far more aggressive with on-site ad placement & skyrocket their ad revenues (the extra visual friction of more ads is offset by the lower friction created by conversion happening on-site). And then Amazon is sort of free riding on the DoubleClick for publishers install base to push a header bidding solution where they bring more traffic back into Amazon.com.

I was even more convinced in Zillow’s prospects when I saw a warning about it being a landmine.

I think the big reason they went into the home flipping business (panned by Cramer here) was in part to try to limit the ability of upstart competitors like Opendoor to raise money & issue debt at favorable terms. Opendoor has already raised over a billion.

Most likely in the coming few months Zillow will go slow with some of the new business lines (like home flipping & loan origination) to focus on their core product catering to Realtors & get a strong beat on their Premier Agent product, however it is worth noting we are already almost halfway through the current quarter. Version 4.1 of Premier Agent is supposed to launch in the next couple weeks. The 4th quarter tends to be pretty weak in terms of real estate transaction volume. Q4 numbers might also suck (they have the data to know they would lay an egg when they lowered guidance for the quarter) but I’d expect Q1 & particularly Q2 numbers to look good unless we go into a full-on recession.

A recession might actually make Zillow stronger when compared against fast growth home flippers like Opendoor, as Opendoor is carrying far more inventory & Zillow is still able to sell leads to others if they don’t want to purchase a particular home.

Opendoor acquired about 4,000 homes and sold about that many, a company spokesperson told MarketWatch.  … On the 20,000 people who requested an Instant Offer [from Zillow] in the quarter, DelPrete said, “that’s a $20 million opportunity right there. That goes right to the bottom line, compared to the money they make flipping houses,” which he estimates is a 1% to 2% net profit. “To me that crystallizes the opportunity. That’s a billion dollar opportunity if they roll out nationally.”

Zillow’s entry into the mortgage market wasn’t a particularly large bet either, as the company they acquired cost them $65 million & they can use their own service to add liquidity to the market in whatever regions where demand is soft from other lenders.

I bought a rather small stake in Zillow today. Maybe I am a bit early, but I think the risk to reward is decent after this big of a haircut on the stock unless there is a recession soon. If Zillow falls much more they’d be a buyout target as their addressable market is far larger than Zoopla’s is & after discounting cash on the books Zillow is worth a bit more than 150% of what Zoopla was acquired for.

Analysts & the broader market have a way of *really* believing some narratives of change while having little to no faith in others. LendingTree is still down big from their $404.40 52-week high, but they jumped from as low as $184.19 on October 29th to $264 at the close of market yesterday.

In Q3 LendingTree’s core legacy market – for which their brand is most well known – was off 17% QoQ & 25% YoY, yet they were still up big after earnings in part because they used a portion of their buyback at a blended price of $230 a share, still had a good bit of their buyback left, and have bought growth with other brands like DepositAccounts.com, Student Loan Hero, Ovation, Snapcash, MagnifyMoney.net & QuoteWizard. If the market values your stock at a 30x, 40x or 50x multiple it is pretty easy to keep growing at 15% to  20%+ YoY by buying up smaller complimentary pieces for a 5x to 8x multiple.

LendingTree has largely been lauded for their acquisitions, whereas the street views Zillow as distracted & incompetent whenever they attempt line extension. Cramer stated he felt Zillow’s desperation is unbecoming. I still think they have a strong market position, loads of traffic, great brand equity & lots of opportunity ahead of them.