On Monday I sold out of the remaining portion of the Zillow position I had after it popped about 10% on news of insider buying. I thought it might slide into close as shorts re-established positions at a higher base, but not so much. That thing has kept going up & closed up 12% on the day.

I was traveling on a long international flight which meant I wouldn’t be near a computer for about a day. The stock ripped higher throughout the week with Friday being the only down day, sliding 0.68%. Had I held the stock the gains would have been a couple grand higher. 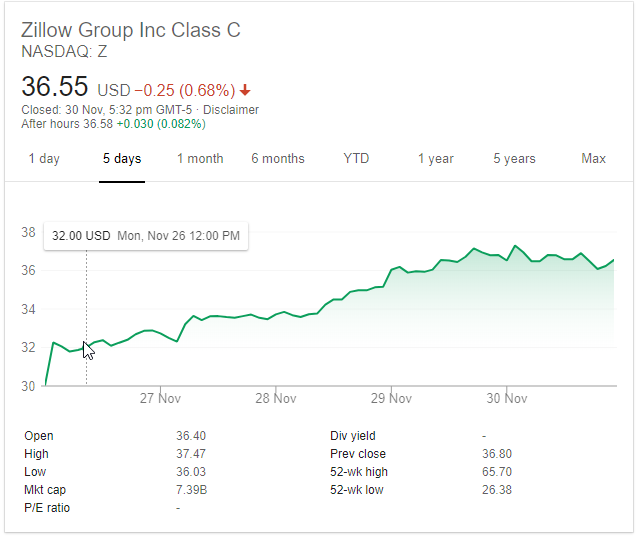 The insider buying reports continued throughout the week. Before the recent jump the stock was priced low enough to be a takeout target for someone like Silver Lake.

That relentless rise throughout the week has been in spite of accelerating weakness in the housing market with canary markets like Dallas clearly turning over.

Going up on bad news is super bullish, but if there is no meat on the Xi-Trump trade meeting the whole stock market could sell off once again. To save face I don’t see China being very accommodating to trade demands until a serious crisis is well underway in their domestic market. They likely haven’t suffered enough pain yet.

The S&P 500  had its best week since 2011 on the back of Federal Reserve chair Jerome Powell suggesting rates are close to neutral, revising his position from October 3rd, when he said rates were probably a long way from neutral. This shifts market narrative from Trump’s the fed is killing us toward giving Trump ownership of the stock market’s performance.

The long view on Zillow is still quite compelling, as their brand is synonymous with their category. They are to real estate search as Google is to web search  & Amazon is to product search. That relationship is unlikely to change anytime soon.

That said, with the Congress split, social media amplifying hyper partisan news, the economic expansion nearing a decade, still increasing suicide rates (in spite of the economic expansion), China trade war narrative & politicians gearing up for the 2020 election next year, there’s a good chance there will be buying opportunities at a lower price.

If it slides back into the $20s I would certainly be a buyer again, but I am content being mostly out of the market for the time being. I should have bought a larger position so I could have done a partial exit & let a portion of the trade ride, but I was traveling & not trading. I also hate the idea of trading from a cell phone as I think that makes it too easy to get into over-trading & seek dopamine impulses vs sticking with fewer & better trades. Also, sometimes like having nothing on so I have a totally clear mind and can focus on other things. That in turn will make it easier to spot other opportunities, but riding a few winners longer is probably easier than spotting dozens or hundreds of different trade opportunities.

I have a tiny bit of Apple, Disney, AT&T, Google & some muni bond funds, but am mostly in cash right now.