A couple of my favorite mean reverting / rangebound stocks over the past few months were Funko & AT&T. Prior to that I did a bit of Yandex & eBay. Of course eventually the ranges broke. AT&T has been on fire the past couple days, but it was on ice for a few days prior. The dividend yield got up to almost 7% after it cratered. And then the value investors came in and started gobbling up shares, pushing prices back up about 5%.

More recently I haven’t been trading much , but a week or so ago my wife got a (bogus) Yahoo! Finance notification that Bitcoin was around $3,400 or something like that.

I don’t check out CoinMarketCap.com every day or own a bunch of Bitcoin, but that notification sounded & felt wrong to me.  In the back of my head I kept thinking that whenever I looked at Bitcoin it was around $6,300 to $6,400 & so I pulled up a chart over the past 3 months. 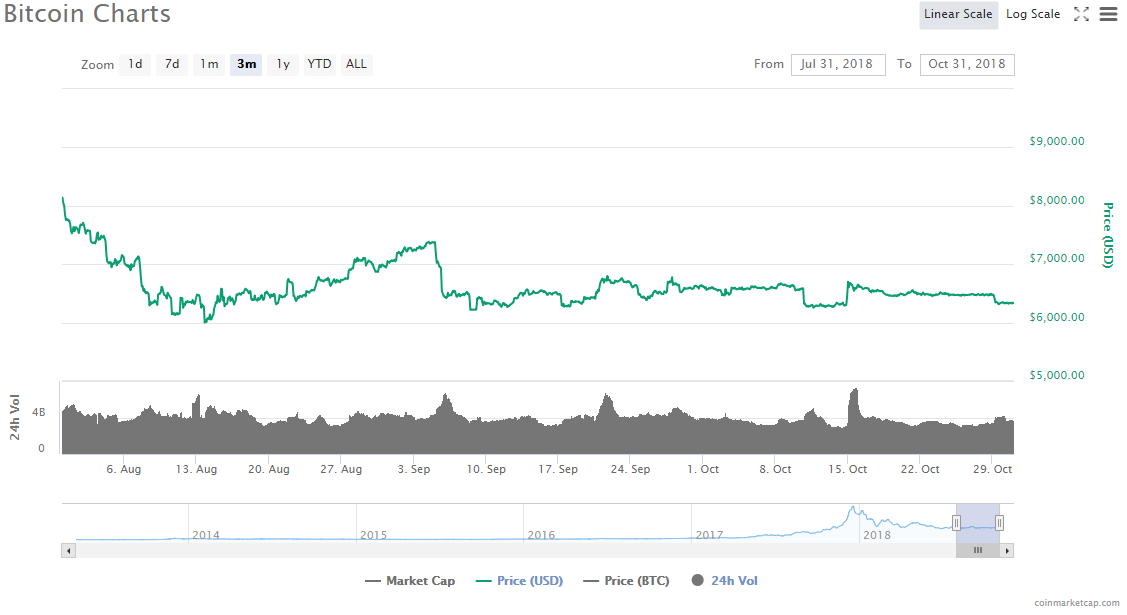 Ever since September 6th, 2018 Bitcoin has been ahistorically stable, even as broader financial markets have seen a significant uptick in volatility.

The recent range for Bitcoin has been between $6,200 and $6,800, which would be a broad range for a dividend stock, but is much less volatile than most tech growth stocks have been recently.

This relative stability comes as broader financial markets are more volatile (emerging markets melting down & volatility increasing in the US financial markets) & as stablecoin Tether broke the buck.

I have no idea if cryptocurrencies will ever have a real use beyond speculation, but two thoughts I have on it in terms of upside vs downside right now are:

Tim Berners-Lee’s second version of the web could create the best parts of what cryptocurrencies claim to offer without needing tokenization & the hype filled speculation boom. The hard part will be figuring out media licensing, while enabling user control & ownership over digital media AND making usability easy.

Tech is changing. But will users eventually get alienated as the big platforms change their business models? Now Google’s homepage on mobile devices has an algorithmically generated news feed on it, but Google pissed off a lot of bloggers when they arbitrarily shut down Google Reader years ago.

The whole “multi homing” concept is IMHO largely garbage. Most users go to Google for search. Most readers who read ebooks buy from Amazon.com. Movies will get blurrier as DVD sales crater just like CD sales did. With media companies bulking up might DVDs go away entirely so the only source for a particular show is a subscription streaming account (or an illegal torrent)?

It is a pain to have to login to Amazon.com for season 2 of a show, Vudu.com for season 3, and have the DVDs from season 1. This is part of why the early leaders may remain defaults – laziness. But as the movie & TV market splinters it will encourage people to have multiple parallel subscriptions.

Will the bulk of the profits from those moves go to the end publishers? Or will they flow to a couple central app stores that also control most paid access to other collections?

Most new laptops do not even contain DVD drives. I have a bunch of DVDs which are a pain to watch, but are easy(ish) to watch on something like Plex, but I have no idea how something like Plex competes in perpetuity against Netflix. Maybe someone like Roku will need to buy out Plex.